Why do Americans abroad have to file Form 8833?

There are many ways to reduce US taxes if you have tax to pay and the best method depends on a couple of factors.

How much you earn and which country you’re living in are the two main deciding factors.

If you’re married, we take that into account too, even if your spouse isn’t a US citizen or Green Card holder.

You’ll need to determine if applying a tax treaty provision to your expatriate tax return is the best option for your situation. It can be complex to work out which path is best without reviewing all the options, so we recommend using a tax professional that specializes in US tax for Americans living abroad.

We don’t recommend completing this form without professional assistance. See the images below to see why.

It’s very important that you provide the exact article number that you’re relying on from the Tax Treaty that exists between the country you’ve living in and the United States.

Where can I get the Tax Treaties from?

Find the country you’ve living in and download the PDF.

You will be able to read the different Articles.

I want to know more about US Taxes abroad

Book a Callback
Get a quote 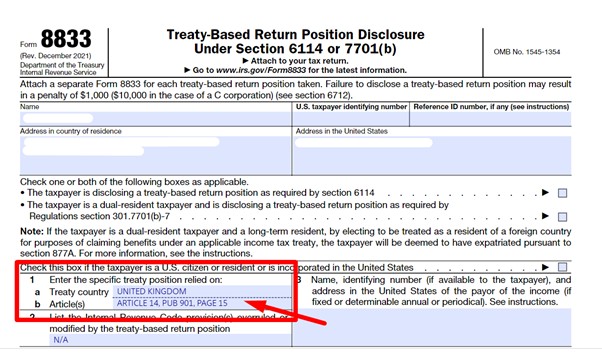 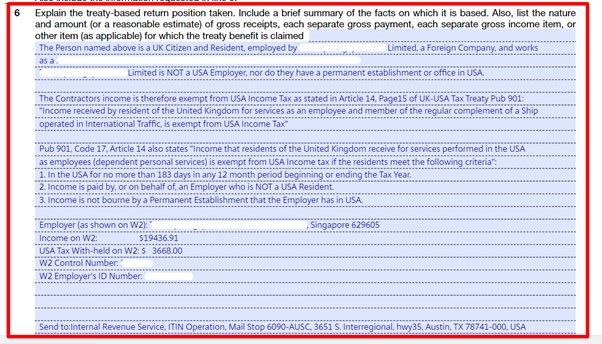 Form 8833 is filed with your federal tax return every year that you’re electing to use the tax treaty… which could be every year if you’re a US citizen or Green Card holder in countries such as the UK, Canada, Australia, France, Germany and many more.

It could also result in an unwanted tax liability on your US tax return.

The IRS has sent me a penalty for not filing Form 8833, what can I do?

If you didn’t know you had to file Form 8833, you can write a reasonable cause letter to the IRS explaining it’s your first time and you weren’t aware that Form 8833 needed to be filed. That will usually do the trick and get the fine removed (abated).

If it wasn’t your first time filing, then you really only have two excuses to try and get out of the fine.

The first is you paid a professional tax preparer (assuming the tax professional was listed and licensed by the IRS) and they didn’t include it. Basically, you’re throwing your tax preparer under the bus… which if fine if they made the mistake. It doesn’t mean the fine will be sent to them, and you get your fine removed.

The third and least favourable excuse is that you had a very good reason for not including Form 8833. We don’t recommend this option, it rarely works.

Can a US citizen take a job in Canada?